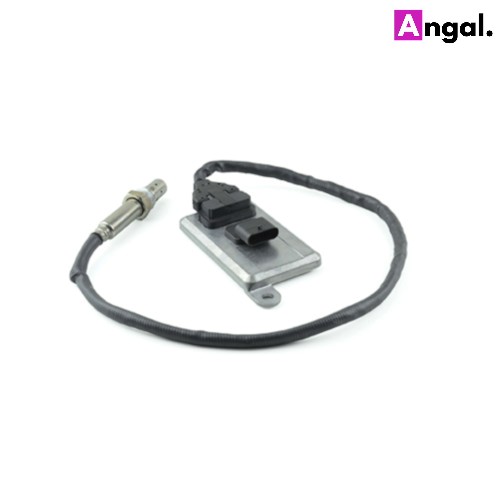 What is a NOx sensor? A nitrogen oxide sensor or NOx sensor is typically a high-temperature device built to detect nitrogen oxides in combustion environments such as an automobile, truck tailpipe or smokestack.

The term NOx represents several forms of nitrogen oxides such as NO (nitric oxide), NO2 (nitrogen dioxide) and N2O (nitrous oxide, also known as laughing gas). In a gasoline engine, NO is the most common form of NOx at around 93%, while NO2 is around 5% and the rest is N2O. There are other forms of NOx such as N2O4 (the dimer of NO2), which only exists at lower temperatures, and N2O5, for example. However, owing to much higher combustion temperatures due to high cylinder compression and turbo or supercharging, diesel engines produce much higher engine-out NOx emissions than spark-ignition gasoline engines. The recent availability of Selective catalytic reduction (SCR) allows the properly equipped diesel engine to emit similar values of NOx at the tailpipe compared to a typical gasoline engine with a 3-way catalyst. In addition, the diesel oxidation catalyst significantly increases the fraction of NO2 in "NOx" by oxidizing over 50% of NO using the excess oxygen in the diesel exhaust gases.

The drive to develop a NOx sensor comes from environmental factors. NOx gases can cause various problems such as smog and acid rain. Many governments around the world have passed laws to limit their emissions (along with other combustion gases such as SOx (oxides of sulfur), CO (carbon monoxide) and CO2 (carbon dioxide) and hydrocarbons). Companies have realized that one way of minimizing NOx emissions is to first detect them and then employ some sort of feedback loop in the combustion process, minimizing NOx production by, for example, combustion optimization or regeneration of NOx traps. Therefore in many applications with exhaust gas treatment systems one NOx sensor is used before the exhaust gas treatment system (upstream) and one sensor is used after the exhaust gas treatment system (downstream). The upstream sensor is used for the before mentioned feedback loop. The downstream sensor is used mainly to proof that legislations and the related emissions limits are met.

Disclaimer : The OEM Numbers/Other Numbers , Company/Brand Name, Logos and Pictures are for informative and reference purpose only. we have no association whatsoever with the respected company/companies and are the property of their respective owners. All the components are sourced from aftermarket players for the replacement market only.